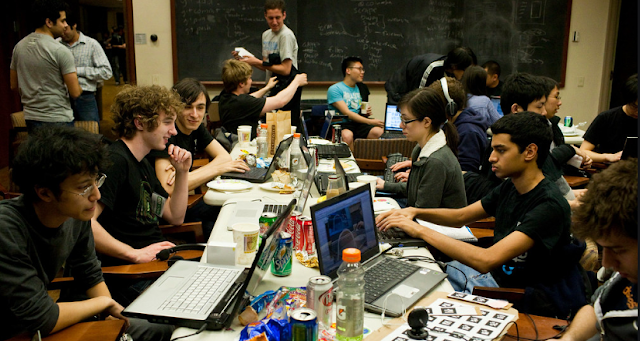 Thinking back to my days in high school, learning to program in C++ using Dev-C++ by Bloodshed Software was so fun. From writing my first hello world program to writing Mad Libs (a program that lets you substitute adjectives or nouns in parts of a pre-written story) -- I had the most fantastic times. At that time, Yahoo Groups and IRC channels were on the rise. I remember logging on to FreeNode and going into the #programming channel asking about compiler errors. I actually still do the same thing; however, there are many more IRC channels including #ruby, #javascript, #golang, #java, and #php.

Looking back at it now, I spent most of my time learning how to program alone. I think that if I was in a group setting where people could come together and build programs that solved real problems, everyone would benefit -- especially at the high school age. Presently, these are called hackathons and I think that with The Social Network film, hackathons are becoming more mainstream. It is culturally accepted for a bunch of passionate people to hack together a mobile app and share it with the world -- even if it is just a Twitter clone because in the end, you find a team you can truly ship projects with. The big picture we're trying to achieve is making the movement of learning together, building software together, and shipping solutions to customers. That said, in The Social Network film, I don't condone the binge drinking / bro-culture; however, I do encourage people coming together and solving a real world problem as one cohesive unit.

It is truly fantastic to see automated drones, fully electric cars, smart hardware in homes, as well as, people being truly mobile and socially connected with their Google Glasses/smart phones. Positively, we need to start thinking about how to encourage the next generation so we can accelerate growth and change in our economy.