Modern web applications follow most performance guidelines from Yahoo! Exceptional Performance but in this blog post, I'll explain some of the software engineering design goals of Mojo's dependency management for asynchronous UI controllers in achieving performance, maintainability, and ease of use. In addition to this, I'd like to highlight that there are many libraries that are CommonJS AMD compliant, such as, Dojo's Backdraft Loader, RequireJS, and Curl.js -- Mojo's dependency management is inspired by these libraries but I specifically wrote Mojo's Mapper to make it easier for platforms  it specific to its domain. 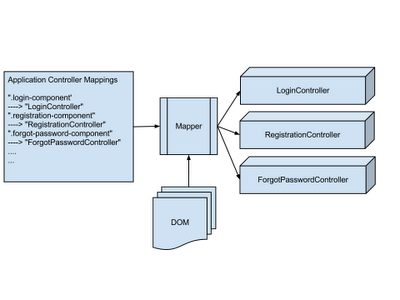 In the above example, we can find ourselves easily mapping HTML elements that are present in the current state of the DOM to Controllers using JavaScript:

In this case, if one of the software engineers or product managers were to disable the Registration feature on the platform, Mojo's Mapper will detect the DOM change (notice that Registration isn't there) and will not try to inject Registration Controller. This is easier for any platform as we can ensure there won't be any JavaScript errors being thrown at a user.

Commonly, we try to take a proactive layering approach to rolling out features to customers -- sometimes deploying 10-20 times per day. This means, automated tests on the UI and the backend, as well as, Mojo's approach to only execute JavaScript (within a controller) when a particular feature is enabled.

Building a front-end that bakes in publish/subscribe, implementation silos, dependency management is just as important as writing web services that scale effectively on the Cloud. On any platform, an intelligently engineered front-end that can synergize with your platform's performance initiatives and feature gating mechanisms -- making it even more valuable as you deploy features continuously to your customers.