More on Servant Leadership: Commitment to your teammates

I've been practicing something called Servant Leadership for about two years now. This discipline entails being a support role, from solving your teammates' problems to inspiring confidence in your teammates.

Prior to reading The Fifth Discipline (Peter Senge) and The World's Most Powerful Leadership Principle (James C. Hunter) -- I thought that "Leadership" was what you did: the budgets, the allocations, the task descriptions, the software specifications, and the meetings. While I do think those are typical tasks that  "leader" may be responsible for -- I certainly believe that "leadership" is who you are.

The true foundation of leadership is not power, but authority, which is built upon relationships, love, service, and sacrifice. Being able to stir the hearts of your teammates and inspire them with confidence is the mark of a true leader. 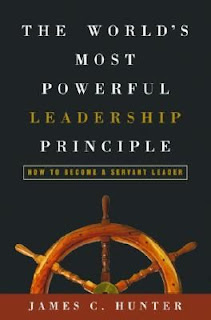 Characteristics of a Servant Leader

Being committed to the growth of people on your team and ensuring that they're treated as a person and not as a work horse is one of the most important things my mentors have taught me while aggressively pursuing my career growth. Incidentally, this means having to facilitate the situations that make that evolutionary process happen.

First thing is first: let go. One of the most difficult things to do is to get over the fact that you need status reports at every checkpoint (typically how you measure progress). Truthfully, we should all be results-oriented. Ultimately, I've thrown in a few points in regards to really start inspiring your teammates with the confidence they need to push the limits of your product (using strategies from Servant Leadership practices).

I've recently been working on non-.NET technologies on Windows Azure platform and I'm finding it amazingly fun and easy. From NodeJS to PHP, I'm finding it easier and easier as time goes on that the tooling Microsoft is releasing makes developers lives easier.

A-Trak allows developers to easily push files from your machine into Microsoft's public Cloud within 1 easy step (command-line invocation). Additionally, it allows you do synchronization between more blob storage accounts in the following use cases:

When quickly spinning up a Wordpress hosted service on Azure, we didn't want to deal with the insanity of a bug when redeploying packages to Azure -- It's in line with this issue. We wanted to extract all resources on our Wordpress theme and pull them in from Windows Azure Blob Storage. Incidentally, our older workflow relied on changes to code in our source tree, then repackaging the PHP WebRole, then shipping it off to Azure.

This triggers a serious issue in Wordpress where you lose auto_increment on all posts in wp_posts table. As a consequence, your administrators lose all abilities to add or update posts/pages; however, you are able to "Quick Publish" a page through the Wordpress Dashboard user interface.

This needed to change.

As front-end engineer, you end up building up your "assets" directory, which contains JS/CSS/images as the front-end begins to evolve into something that a user can easily interact with. A packaging process where you do upgrades or VIP swap after a staging deploy seemed way too disconnected in terms of programming paradigms. Instead, we've taken an approach where a Front-End Engineer can have a command prompt and invoke A-Trak to push their "assets" directory straight to the cloud.

In the end, we have a very simple setup: Wordpress on Azure (no customizations), our own RESAAS theme to avoid any theme-clobbering (overwrites), content changes from administrators, and the presentation layer (CSS/JavaScript/Images) being hosted on Windows Azure Blob Storage.

2011 has been an amazing year for me. I've written notes on what I've taken on and what I plan to make better in the coming year.

Open Source Initiatives
- Wrote Microcosm - Social Network Simulation tool, allows you to simulate hundreds of thousands of requests against an array of web services to help you demo a living, breathing social network. This project sprung up because demonstrations with the client were too static and user counts were too low to be "a social network" -- With this tool, we injected 160,000 users and had them randomly doing things to each other, commenting, following, unfollowing, etc.
- Wrote Blast Mojo v2 -- It has grown from its Dojo roots to become a structured layer on top of jQuery while leveraging its massive plugin community via dependency injection. It is simply structure with jQuery, much like Backbone in the sense that you get to use Controllers, Models, PubSub, Service Locator to help your teams write code in a more organized fashion and use common software engineering paradigms.
- Created a screencast that would be a rundown of Blast Mojo.
- Wrote Cid, image bundler service using JSONP+Base64+jQuery, it automatically base64 encodes all images on the page with a cid-src attribute and decreases HTTP requests.
- Wrote NodeJS Redis URL Shortener -- Allows you to easily shorten URLs using Redis as its storage
- Wrote NodeJS Windows Azure Table Storage URL Shortener -- Allows you to easily shorten URLs using Azure Table Storage as its storage.
- Did a talk on developing and deploying NodeJS applications on Windows Azure in December

Intellectual
- Read Inspired: how to build products that customers love
- Read Drive by Dan Pink
- Read World's Most Powerful Leadership Principle: Servant Leadership by James Hunter
- Read Cracking the Code Interview -- This book is where I beefed up my knowledge of algorithms, a really great book for any aspiring programmer
- Read The Necessary Revolution: How Individuals And Organizations Are Working Together to Create a Sustainable World by Peter Senge
- Re-read Mythical Man Month -- An all-time favourite of mine. I try to do this every year and I highly recommend reading this book to any aspiring software engineer