Tester-driven development? What is the proper utilization of QA?

I was reading about more software development anti-patterns because on Tuesday I'll have to conduct a code review for a particular client. I managed to somehow stumble on to Tester-Driven Development. I honestly thought it was a typo and assumed they meant Test-Driven Development. I started laughing at the fact that there are projects that allow QA to drive the requirements of the application--but hey? Sometimes projects are so terribly managed that it happens!

If you ever find yourself on a project where production-level people (Developers, QA, Designers) are creating the requirements instead of the primary stakeholders, you better take a step back and think about how bad that could turn out. Oh wait, I forgot you could be telepathic and just automagically know what the client wants.

When a web project starts, the respective discipline leads (developer, QA, design, project management, stakeholders) need to figure out what their strategic goals are whether they are long-term or short-term. The reason why we have QA in at the start is to ensure that a lot of the functionality being built is not going to be a bug. Two really good examples I can think of off the top of my head would be scrollbars and IE6 graceful degradation. When running through a website that has a lot of transparencies, rounded corners, and drop shadows in Internet Explorer 6, you're bound to run into a "wat teh fuk" moment.

The best thing to do is to ensure that everyone (even the client) is aware that IE6 is an archaic web browser and doesn't support certain functionality without spending an extensive amount of effort hacking it into the application. This is why we employ graceful degradation on the agreement that there will be some 'weird' things happening for any IE6 users. The application will continue to function normally but there will be quirky things in the view, such as, fonts won't look anti-aliased or drop shadows won't be fully supported or transparencies won't be fully supported. Even Facebook, the biggest social network with over 300+ million members has decided to drop support for IE6. You can use this argument when you're explaining to the client. If they are hard set on supporting IE6, then it will impact both QA and Development time. Ultimately, depending on how complex the application you're trying to build, it could even double your hours just having IE6 being fully supported. Adding to this, you should definitely look into the web traffic metrics to see which browsers their customers are using. If IE6 is a minority, use this to your advantage in your argument towards partially supporting IE6.

Once the client understands that their customers using IE6 are a minority or it just isn't worth it, we can filter that down to the rest of the team. I truly believe that QA is underestimated in all agency work that I've dealt with. Most people above production-level work (project managers and up) just think QA click the application and try to break it. That's probably only 5% of the work they can actually do. Since we're bringing in QA at the start of the project, it allows them to write clear and concise acceptance tests for the requirements, as well as, prepare their automation tools for upcoming features.

Sadly, from what I've seen, they aren't utilized for those roles. They are simply clickers and subject to late hours because defects need to be regressed. If it was up to me, I'd have the whole team test the application--you'd be surprised to know how many project managers don't even know how to use the product they're building.
project management quality assurance software development

Popular posts from this blog

Yeoman is a tool that will concatenate and minify your scripts, as well as, run JavaScript unit tests (JasmineBDD) inside a PhantomJS instance. It's fast and easy to integrate into your existing continuous integration process. At present, we have Jenkins as our work horse who will do the following upon each push to a specific development branch:
Concatenate all JavaScripts based on a Gruntfile (GruntJS with NodeJS)Run JSHint on the concatenated JavaScript file (call this all.js)Minify the generated concatenated JS file (call this all.min.js)Run "yeoman test" to execute all the JavaScript specs against the concatenated JavaScript fileThis should fail the build process if any specs fail or if JSHint chokes At this point, you could ship the assets over to CDN on Amazon CloudFront or Windows Azure Blob (CDN) to further reduce latency for your users.
Below is a shell script that can be easily modified to fit your needs:
yeoman concat min --disable-insight --no-color rm -r…
Read more 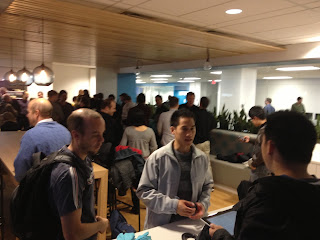 
What is Plenty of Fish? An online dating site.
Why enter the dating market? Back in 2003, it was the only thing that was interesting to build. Markus already knew ASP but wanted to learn more about building web applications with ASP.NET and improve his skills on his resume.
How do you deal with the network effects problem? In the early days, Plenty of Fish gained traction through Vancouver and Toronto.  There wasn't any silver bullet or magic around it -- Plenty of Fish heavily relied on organic user growth and SEO. The focus was to retain users more than go out and acquire new ones.
What are some early challenges you faced? Markus actually ended up doing every…
Read more