Social architecture of World of Warcraft: Dealing with Ninjas

Contextually speaking, Ninjas in the World of Warcraft are people who purposely make the effort of lying to 24 other people (a raid) about fair looting rules when in reality their intention is to steal all the items.

Can software really solve the inherent problems in World of Warcraft's social system?

The problem with World of Warcraft's social system is there are no enforcers that punish people for stealing. Can you imagine a world where anyone could steal from you because there was no law enforcement?

As soon as I saw my distressed guild mate say that in chat, I started to think: if there's no enforcement on who steals something in WoW, could a tool be made to at least warn the user before cooperating with a ninja so he/she could avoid getting stolen from? Ding.

After I gathered my thoughts, I said to myself that I would create a World of Warcraft addon that will query a remote database for a subset of names inside their current raid (when the user enters a raid group). Ultimately, the addon would verify if any participants in the raid group have any accusations of stealing items. Little did I know, the following would happen to me: 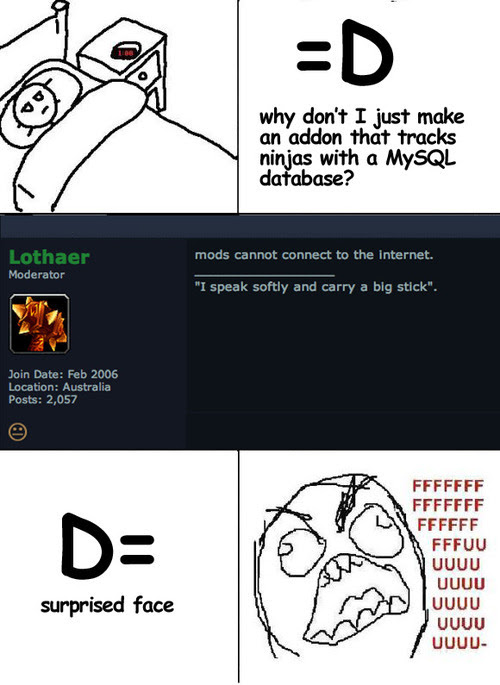 Part 2, coming soon! I have the code that I've written so far on Github.

I'll document my trials and tribulations of solving this social fail in World of Warcraft. Believe it.